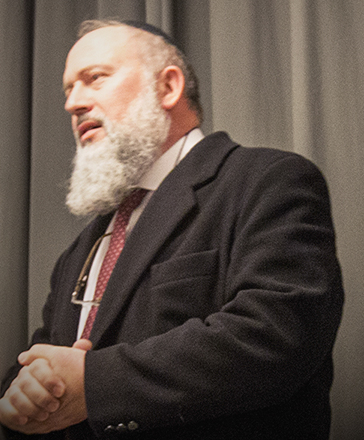 Machon Shilo is a center of Jewish learning in Jerusalem dedicated to the exposition and dissemination of Torah of Israel, the Judaism of the Land, headed by Rabbi David Bar-Hayim.

Rabbi Bar-Hayim defines his vision as laying the groundwork for a restatement and reconstitution of Jewish thought and practice, based on the written Law and the oral tradition, in order to facilitate the realization of the Jewish nation’s purpose and duty to establish a holy people.

In order for the Jewish people to realize its true potential and destiny and live up to G-d's expectations, it is crucial to cease defining ourselves as Hungarian, Russian, Polish, Moroccan, Tunisian or Yemenite Jews... and begin to see ourselves simply as Jews, or more precisely: as Jews privileged to dwell in our ancestral homeland in which we aspire to live according to a full and authentic expression of Torah.

Rather than relying exclusively on the traditions of rabbinic authorities in the exile who studied and lived Judaism within the historical context of a minority residing in a foreign land under non-Jewish sovereignty, Machon Shilo encourages the study and implementation of the traditions and rulings found in the ancient sources of land of Israel such as the Jerusalem Talmud, compiled in Tiberias in the 4-5th centuries, rather than its Babylonian counterpart, compiled by rabbinic authorities in some 200 years later.

One aspect of this approach is the reintroduction of the format of prayer and liturgy used by the Jews of the land of Israel from time immemorial and up until the first Crusade (1096), at which time most of the Jewish population of the land of Israel was either massacred or had fled. This historic calamity sealed the fate of the Torah of Israel, so that by the 12th century halakhic rulings, customs and liturgy of the Babylonian Jews had become the norm throughout the Jewish world.

There is a qualitative difference between the study and practice of Judaism in Israel as opposed to the exile, a fact stressed in several Talmudic sources. What is needed at this juncture of history is a reconstituted halachic Judaism which is in step with and complements the modern reality of the sovereign Jewish people living in their ancestral land.

There is no such thing as Judaism without a halakhic system at its base; Judaism only exists today because of the system put into place 2500 years ago by the foundational rabbinic authorities. From this perspective, both Reform and Conservative Judaism are flawed concepts from the outset. The former because it was founded on a rejection of halakha as a basis for religious practice, and the latter because its underlying motivation was to facilitate social integration into the diasporic milieu. Conservative Judaism allowed itself to pick and choose halakhic positions and to accept certain values and societal norms that were deemed expedient for a Jew in the diaspora.

However, Orthodox Judaism too is flawed; it was by definition a response to the rise of Reform Judaism in the early 19th century. Responding to the Reform movement’s complete disregard for traditional practice and established religious jurisprudence, the new and reactionary “Orthodox Judaism” (a previously unknown term) adopted an extreme and opposite approach, with Ashkenazi Jewish practice which had evolved in Europe until that time becoming enshrined while denying the possibility of any serious change, even where such is mandated by the Torah itself.

This is not, and never was, the intent of halakhic Judaism. The rabbinical authorities of the past, the Geonim and the Rishonim, always understood the need and were willing to take stock of the realities of the present, to allow changes for the better. They were always redefining and reinventing elements of halakhah, even altering well-established practices to suit the different circumstances and needs of the Jewish people at various times.

Now, with the creation of the state of Israel as a homeland for the Jewish people and a territory under its political sovereignty, there is a need for just such an adaptation. Rabbi Abraham Isaac Kook, the first chief rabbi of the state of Israel, understood this concept well, arguing that a reformulated and updated halakhic system must be established in the land of Israel. While this need may not be pressing for those Jews still living in the exile, it is an absolutely necessity for those who have returned home.